You know the drill about me not posting. I admit to joining Facebook, mostly to be part of the conversation... only to discover that no one has anything intelligent to say.

Neither do I, of course, but when I have a thought that's over two sentences, I'd still like to spell it out somewhere. So here's something:

Sue Sylvester's sympathetic twist at the end was similar to one by Charles Emerson Winchester III. The normally pompous and cold Major does something nice for an insecure soldier with a bad stutter. Completely out of his character and no one knows why... At the end of the episode, he listens to a recorded message from his beloved sister, Honoria, who -- surprise, surprise -- stutters.

Next week on "Glee": The mohawk guy ("Hawkeye") pulls a prank on Rachel "Hot Lips" Berry while the wheelchair kid ("Radar") informs everyone that Mr. Schuester's plane was shot down over the Sea of Japan.

As usual, sorry I haven't written here. But my writing elsewhere is getting notice:

My sister-in-law is a very clever video games writer who's won awards in her field. Recently, she was instructed to pen things more in the style of the dating reality show I worked on for 5 seasons. When she told her bosses about me, they said I was a minor celebrity around their office. I don't play much video games, but I'm guessing I shouldn't expect some kind of high-rez graphics version of "Catcher in the Rye".

Also, the show I'm working for now just got the following viewer mail:

"The clips on this show are very good, but the assclowns who write the insufferably smug, rhymin' narration should've been strangled at birth."

Yes!
That just made my day, 'cause, y'know, it means someone's actually watching.

Yeah, I'm back.
But so are my boys -- the Yankees are in the post-season again.

I'm particularly excited because I think they started getting it right this season, acquiring good, young talent who would do well in NY. I'm also psyched because I just finished Joe Torre's book, The Yankees Years. It was a gift from my wife (the 1-year paper anniversary), and surprisingly engrossing. Okay, not that surprising, considering Tom Verducci was the one who actually wrote it all.

Mostly, it was a trip down memory lane for me. I recalled every L.A. bar I was in when I watched these games, from the glorious '98 season of 125 wins (Dublin's), to the Subway Series (Yankee Doodle's), to the thrilling Mr. November loss to Arizona (San Francisco Saloon), to that amazing 2003 ALCS game 7 (Barney's Beanary), to the utter frustration that followed every moment after Boone's home run.

And now, as the Yankees take the field against Minnesota as I write this, I hope it'll be a return to form. For the Bombers, and maybe, for me with this blog.

Also, if Joe Torre's Dodgers can kick ass in the national league, maybe we can get a World Series to match my childhood memories of LA vs. NY.

And who knows, maybe I can see my Bombers live in Dodgers Stadium this year.

Damn, I didn't get to blog yesterday, blowing my streak already. I was stuck at work 'til really late, and then got up at 6 this morning to finish writing another script. Meanwhile, apparently Bernie was busy with paperwork of his own.

If blogging is dead, then consider me the Jason Voorhees or Mike Myers of the cyberworld. I may lay dormant for a while, but I'll come back with a vengeance to slash the internet with further variations on old themes. Or just call me the html herpes.

Writing mindless TV all day has kept me from doing the same here. But I'm gonna try to finish up August with a post every day. Now, what to write about? You don't wanna hear about work, so why not talk about my other rewarding time-waster -- our puppy Bernie. 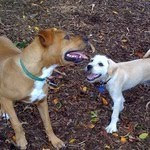 Now that he's had his shots he can go to the dog park and work off all his animal aggression on the other dogs. We take him every day, and I'm finding it to be a fascinating sociological study. There's a lot I can say on the subject, but I'll sum it up with three possible comparisons:

1. High school. There are cliques that form among the pooches -- the German Shepherds form their own schweinhunt circle, the lapdogs have their snobbish exclusive group, and the retrievers are too busy playing fetch to interact, kinda like the hackie-sack hippie kids. Then there's Bernie. The new kid in town. Way too eager to fit in. "Hi, wanna play? No? Okay, that's cool. I'll be over here if you need me. Hey guys, how 'bout that chasing your tail? Great way to get dizzy, huh? Oh, I see you're busy. Maybe later... Yo, dude, lemme sniff your butt, whattaya say...?" 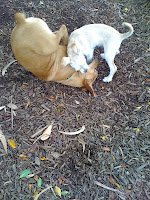 2. Prison yard. Bernie's the fresh meat, but my little scrapper refuses to let anyone make him their bitch. No matter what the dog's size, he'll bite, scratch and wrestle like a pooch who just wants to get shanked. Last weekend I saw him come over to a giant Siberian Husky and bat his paws upward -- "put up yer dukes! I'll moiderize ya!" One swipe of the husky's leg -- whunk! -- and Bernie was down for the count. Then I put him in solitary for a while.

3. College orientation. That's more for me. Remember how you had to answer the same questions that first week? Where are you from? What dorm are you in? Do you know what your major will be? What prep school did you go to? (For me, none, but there was a surprising number of pretentious preppies attending East Coast private universities.) Wanna get wasted? Same deal, different set of inquiries. I wish I had a name tag or business card just to save me from repeating myself: His name's Bernie. He's now 4 1/2 months old. Terrier mix. Maybe labrador retriever in there. Don't know -- his mom is a black and scruffy looking. His dad was some male-whore. Well, he'll probably grow to a hundred pounds. But only if he gets better at hunting for his meals. Bernie, enough grappling with that Collie! Stop playing with your food!

A casting agent approached us about our dog. Yeah, my puppy could have representation.

Why not? He's cute yet becoming distinguished with age, and probably quite talented... kinda like the Leonardo diCaprio of canines. Probably he could do a few commercials, make a few guest appearances on today's equivalent of "Growing Pains" (what would that be? "2 & 1/2 Men"? I've never seen it. Ditto "Tyler Perry's House of Pain".), and then boom! Titanic money, baby. Let the little mutt earn his keep around here.

But then, reality sinks in. We were at a dog fair. There were booths selling all-natural treats, designer collars and biodegradable poop bags.

I know, whatta way to spend an afternoon. I went because we were told that the woman who owns two of Bernie's siblings was gonna be there, so it'd be a mini-mongrel family revolution. But, bad timing, we never saw her. 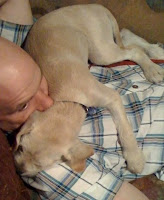 Anyway, the point is, this was a gathering of pet owners. People with disposable income to blow on their pooches. Why not bilk 'em for more, with Hollywood caviar dreams about owning the next Marley & Me star? And, by the way, this casting company supposedly worked on that film, as well as Hotel for Dogs. I'm sure that's what all the animal casting agents say. Nobody wants to take credit for Zoltan, Hound of Dracula.

I think it was a scam to get Bernie into some very expensive training classes that he'd need, while dangling the milkbone of Benji-type superstardom in front of his snout. Pardon my cynicism. But I'm probably better off not pimping out my pooch. That's all I need -- to let him become more of a doggie diva than he already is.

The double-whammy of Farrah Fawcett and then Michael Jackson got me considering if MJ's demise was the biggest celebrity death of our generation. It's easily had more of an impact than Kurt Cobain or Princess Di. Andy Kaufman, by the way, is still alive.

For me -- more of a punk/heavy metal aficionado than a pop fan -- I was particularly saddened when Joe Strummer of the Clash died a few years ago. I listened to London Calling a billion times, but never owned Thriller or any Jacko album. Still, musical tastes aside, the effect of The Gloved One was tremendous -- sure I could headbang, but I secretly always wanted to moonwalk.

I remember as a kid when Elvis passed away, and for the older folks it was a big deal, esp. because the King was only 42. He was just a name I heard on those bad K-tel type commercials, where they'd scroll down the song titles and highlight 'em if they were featuring video of the fat bastard crooning in Vegas. At the time, I didn't know the difference between him and Englebert Humperdink and Bobby Vinton.

This weekend, people were wondering who was the next star to pass away, and we all started playing the name game. I pondered whose death would have an even greater impact that Michael Jackson.

It couldn't be someone old and legendary -- say, if Dustin Hoffman or Clint Eastwood died, even if they're in good health. Sure, those guys have made tons of iconic movies but those guys are over 70. Paul Newman died recently and it was sad but you didn't hear everyone remarking that a part of their childhood was gone.

And if it's someone young and upcoming, it'd be tragic for sure, but the world would keep turning. Think about Heath Ledger or Aaliyah.

No, it'd have to be someone who's already an international icon but far from done creating movies or music or whatever, and controversy. Like Tom Cruise or Madonna. David Letterman, maybe?

Okay, this is too morbid. Besides, I had brought work home this weekend and had to get to it.

This piece I was working on was about a bunch of guys filming a prank they played on their friend. To get their buddy to sit in front of the camera unsuspectingly, they had him perform his impression of TV pitchman Billy Mays.

I was trying to figure out how to write this up, but decided to procrastinate by checking out the latest developments surrounding MJ's autopsy. Checked TMZ and there it was -- Billy Mays had died. Man, that's just friggin' weird.

Okay, I need to stop thinking about celebrities for a while...